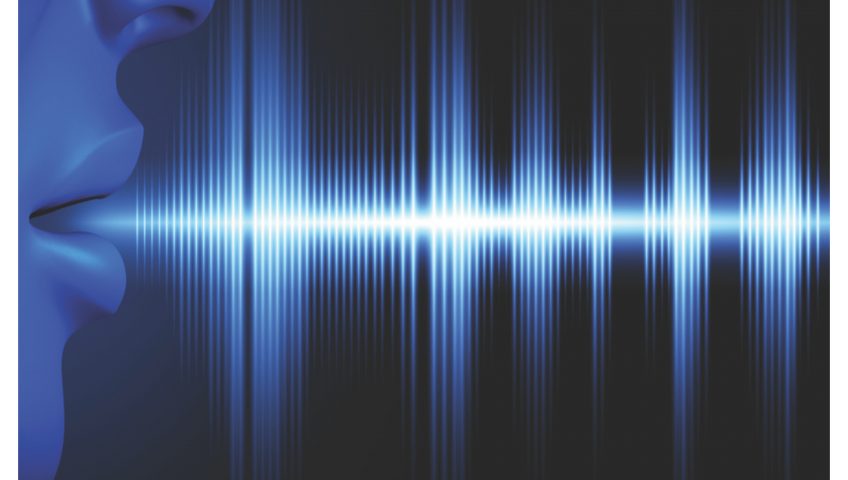 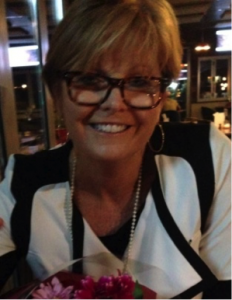 In the lead up to this year’s World Voice Day, the Australian Voice Association sat down with Louise Bale to find out what is in store for 2018 and how her own journey with dysphonia has influenced her life.

How and why did World Voice Day start?

WVD began in Brazil in 1999. It was the brainchild of a group of scientists who believed the voice was an amazing, yet under-recognised aspect of the human existence…and that it needed and deserved a day of recognition.

Since it’s inception, WVD has expanded well beyond the scientific community, to become a global celebration of the role our voices play in every aspect of daily life.

What is your role with World Voice Day and what got you interested in the event?

I have been the National Coordinator of WVD in Australia since 2013.

In my ‘real’ world, I work as a Health Promotion professional. While most aspects of health and wellbeing fascinate me – I had never really given much thought to the voice, until I lost mine.  In 2006 I developed a neurological voice disorder called spasmodic dysphonia, and life as I knew it has never been the same.

When I first became aware of WVD I embraced the idea of getting involved and raising awareness of the voice and celebrating its uniqueness, magic and beauty.

Over the years the event’s focus has broadened to include voice care initiatives for teachers, performers and the general population; voice screening clinics for vocal performers, professional development events for voice health practitioners and vocal variety concerts. Since the establishment of the Australian Dysphonia Network in 2016, the various concerts have also been used to draw closer attention to dysphonia and raise funds for research.

Can you tell us a little bit about your journey with spasmodic dysphonia (SD)?

It’s been a very strange experience.  Like so many others, my story began as a mysterious hiccup in an otherwise fairly unremarkable period of my life…that was twelve years ago.

After noticing some voice breaks and feeling like my voice was letting me down, I made a quick trip to see an Ear Nose and Throat Doctor, who ruled out anything like nodules.  It was then off to the speech pathologist to look for bad habits / poor vocal technique.  But, after a few months of correcting the minor technical problems came the crunch, “you have spasmodic dysphonia”.

I was happy to have a diagnosis and thought “OK – Let’s just fix it and get on with life”. But, as we all know, nothing is ever simple.

The ‘gold standard treatment’ is Botox injections into the muscles that control the vocal folds. But I resisted Botox for about a year, trying all things alternate instead. You know the stuff, hypnotherapy, nutritional medicine, acupuncture, massage, mindfulness, kinesiology. etc etc etc. I FELT fantastic, but my voice remained an issue.

After about a year, I finally ‘succumbed’ to Botox and found my voice. A slightly different voice, but smooth, sultry and without spasms, I was in heaven…initially.

Since then the results of Botox have been mixed for me. It’s been a rollercoaster while my brain has adapted, adapted and adapted again (almost saying… ‘bring it on… I will NOT be silenced’). We’ve stopped the Botox, pumped up the vocal folds, restarted the Botox, retrained my brain, and I’ve even been to vocal boot camp.

My diagnosis has changed…from adductor SD to abductor SD…to “is this really SD?” and then back to abductor SD…I started to wonder ‘what’s in a name?’ (Funny really, after having been so keen to have one back at the beginning.)

What led you to seek treatment?

At first, I noticed that my voice was dropping out, kind of like a bad mobile phone signal really. Bits were missing, and it felt like my voice was tripping over itself in otherwise easy and robust conversations. Of course, I imagined that it was all in my head until people started to complain about the “poor mobile reception” (when I was on a landline – now that was a hint).

I had been asked to be MC at a 2-day conference, and needed to do something fast – the rest (and the conference) as they say…”is history”

Has it influenced your day-to-day life and professional life?

Absolutely! I was born to talk, and for many years I had been the public face of my workplace in Health Promotion. The conference facilitator, the presenter and the media spokesperson for all things sex, drugs…. interesting and fun.

BUT that all changed.

I became withdrawn and felt that I was no longer useful. My ability to speak up at meetings, contribute to decision-making discussions, join in lunchtime conversations with the team or even answer phones…had gone. I felt like people thought I was unintelligent because I couldn’t speak up and contribute opinions…I wanted to quit.  But I am fortunate to have a very supportive Director and team who were willing to accommodate whatever I needed.

I saw a psychologist to help me grieve the life I had lost and to regain a sense of self-worth. Since then I have been able to change the way I do my work – carve out new ways of doing old tasks, and also take on some new and exciting roles using social media and web-based technology – I have a unique role in the same workplace and have again found my passion for the work I do.

At home, there are many daily challenges too. A simple thing like going out to dinner is problematic because restaurants and bars are such noisy places. Talking to friends or my husband in the car is extremely hard work. TV or any background noise just creates a wall between others and me in the room BUT…thank goodness for text messaging because the telephone is IMPOSSIBLE for most of us who live with dysphonia.

One of my biggest losses is the ability for natural and spontaneous conversation…the stuff of easy relationships, where conversations just flow.

What are some of your favourite World Voice Day memories from years gone by?

From the outset, I was keen to ensure that the focus was not ONLY on professional/performing voice users but that EVERYBODY’S voice was seen as valued and important. As a result, our annual concerts have seen acclaimed celebrities sharing the stage with members of the community from all walks of life.

Without a doubt, the sentimental favourites have been: the Sydney Street Choir; an inspiring group of homeless and disadvantaged people from our community who embrace the pure joy of singing…the Nordoff Robbins Children’s Signing Choir who express their own unique voice through key-word sign language…and the Newcastle Stroke Choir who demonstrate such determination and tenacity while they celebrate the ability to perform and be heard.

In 2017 the Australian Dysphonia Network team joined forces with a similar organization in the United States to host a 6-day long online symposium which focused on all aspects of dysphonia management. It was an enormous feat bringing together over 3,500 people across the globe; something we hope will become a bi-annual event into the future.

None of the activities or events of the past 5 years would have been possible without the amazing generosity of people who share a passion for giving a voice to EVERYONE. I have also been enormously grateful for the ongoing trust and financial support from the Australian Voice Association, both as an organization and the individuals who represent the AVA.

How is World Voice Day different this year and what are some of the upcoming events you are most excited about?

This year we have decided to extend the opportunity to get involved by expanding from a single day of celebration to an entire month of raising awareness and events.

April this year will become Voice Awareness Month – with the tagline “Value your Voice – Love your Larynx – Be alert for changes”. This will allow people in clinical settings like hospitals and private practices to get involved by utilizing promotional material, organizing events, offering screening clinics, and taking advantage of local internal/external media opportunities…or just getting the platform to TALK about the importance of voice with colleagues and clients.

A master class “Care of the Performing Voice” will be held for tutors, teachers and senior students of the Conservatorium of Performing Arts – Penrith.  This is a first and signifies the beginning of a partnership with the Joan Sutherland Performing Arts Centre which we hope will continue to grow.

We will have the support of celebrity ambassadors: singer/songwriter Melinda Schneider, comedian Anthony Ackroyd, and country music artist Drew McAllister. These amazing people have loaned their voices to our cause and will perform at 2 fundraising events on behalf of dysphonia research.

What would be your advice to someone wanting to get involved this year and/or put on an event for World Voice Day?

Don’t be scared – have fun, be creative and do what feels good. It does not need to be huge to make a difference and raise awareness. Remember (almost) everyone has a voice so it makes it easy to talk about!

If appropriate, you can consider using your event/activity as a charity fundraising opportunity. The Australian Dysphonia Network is currently fundraising for a number of exciting voice initiatives. For further details on how to donate you can find us here.

Feel free to also email me with details of your event, or for ideas at loubale@gmail.com

Where can we find information on events?

Thanks so much to Louise Bale for her time and dedication.

Lou Bale is the National World Voice Day Coordinator, President of the Australian Dysphonia Network and is recognised by her work and contribution to the field of Health Promotion with NSW Health for the past 28 years. 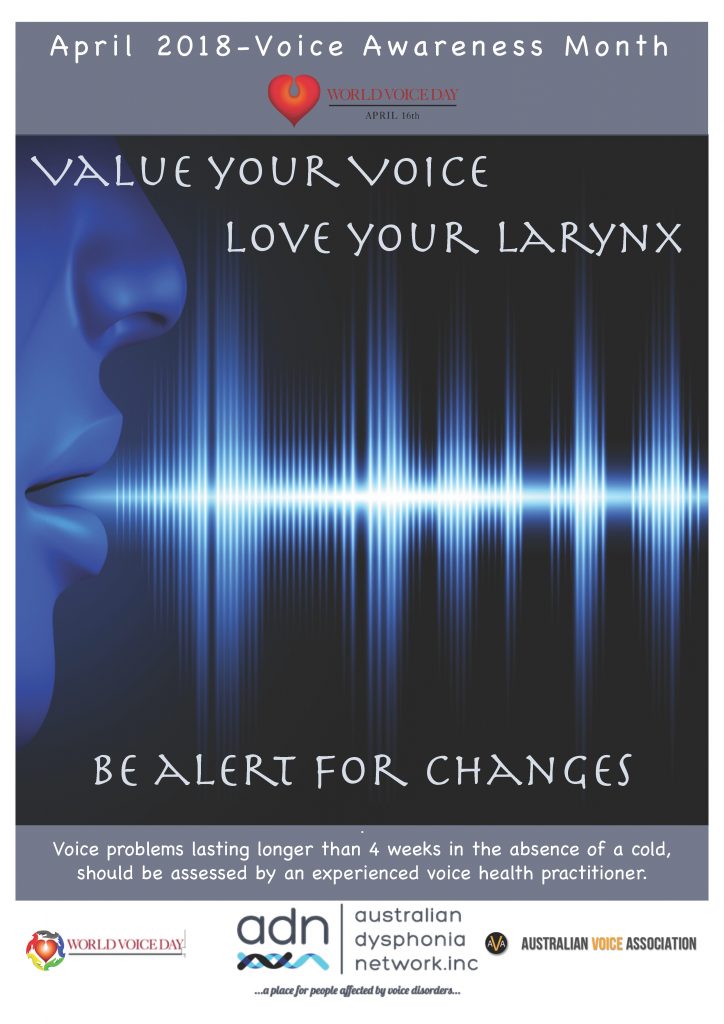